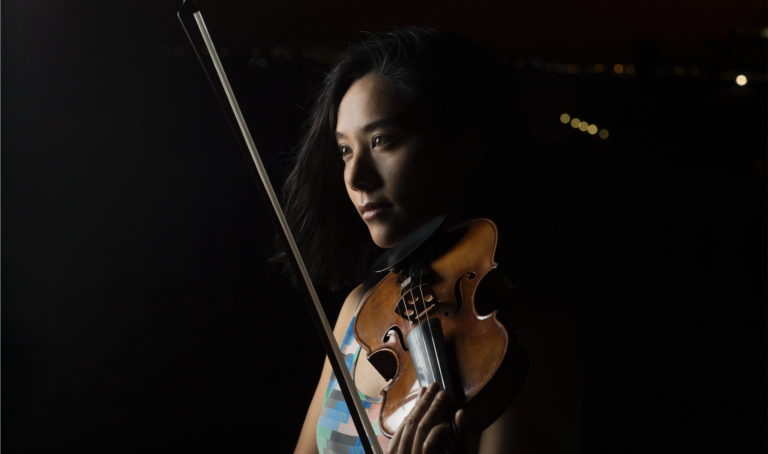 I’m a New York City based violinist specializing in contemporary music, interdisciplinary projects, and socially engaged artistry. I’m fascinated by the relations of power in my field, and the epistemic value of the musician’s physical performing body. I ground my approach to performing, collaboration, concert program curation, and project design in an ever-evolving engagement with frameworks from critical race, disability, queer and feminist theories. I’m constantly seeking to orient my violin-ness toward new areas of experimentation, and guide my creative engagement toward questions of identity and relationality.

Pala Garcia is a critically acclaimed violinist, balancing a full performance schedule with her work as an educator and advocate of socially conscious artistry. As a contemporary music specialist, she is the co-founder of Longleash, an “expert young trio” (Strad Magazine) that recently added two highly acclaimed releases to their discography: a debut album, Passage, that earned them Sequenza 21’s Best New Recording Artist of 2017, and a work on the album Soft Aberration, named a Notable Recording of 2017 by The New Yorker.
Their work has been recognized and supported by Chamber Music America, the Alice K. Ditson Fund of Columbia University, The Amphion Foundation, the Aaron Copland Fund for Music, the Puffin Foundation, the Atherton Family Foundation, and Innovation and Entrepreneurship Grants from the Music Academy of the West.

Pala has performed as a featured artist throughout Asia, Europe and North America, and has also performed as a regular guest in some of the world’s most respected ensembles, including the the International Contemporary Ensemble, Orchestra of St. Luke’s, Orpheus Chamber Orchestra, and Bavarian Radio Symphony Orchestra. Additionally, her longstanding involvement with Carnegie Hall's social impact programs has led to meaningful artistic collaborations with New Yorkers from all walks of life, making music, celebrating creativity and building community in prisons, shelters and hospitals.

A debut solo album, featuring the music of Peter Kramer will forthcoming in 2022 on New Focus Recordings, with support from the Aaron Copland Fund for Music.

Pala serves on the violin faculties of the Juilliard School's Preparatory Division and Hunter College, and was a Senior Teaching Fellow at the CUNY Graduate Center. As a co-director of Longleash’s Loretto Project, Pala also leads its Pathways Initiative, a high-school composition workshop invested in addressing issues of gender justice and representation. She is an alum of the Juilliard School and is currently a doctoral candidate at the CUNY Graduate Center, where she was also recently granted a certificate in Women’s Studies.

An ensemble with a traditional instrumentation and progressive identity, Longleash takes its name from a Cold War era CIA operation that funded the worldwide dissemination of American avant-garde art. Read more about their critically acclaimed projects at longleash.org

Held annually in Central Kentucky, comprising composition seminars, public concerts, and collaborations with local artists and organizations. Named after the Loretto Motherhouse, the generous and loving community that welcomes the project every August.